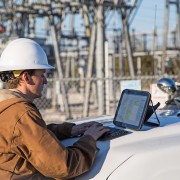 There’s much to like. The Motion R12 has that large (for a tablet) 12.5-inch display with full 1920 x 1080 1080p resolution, measures 12.9 x 8.1 inches, is 0.65 inches thick, and weighs just under three pounds. While consumer media tablets weigh next to nothing these days, not too long ago three pounds was considered “ultra light,” and also roughly what those little netbooks weighed that were so common before tablets arrived. It’s amazing just how much roomier the screen feels than that of a standard 10-inch consumer media tablet. There’s ample room to work on this tablet and then some.

As a modern device, the R12 has a 9-axis MEMS (Micro Electro Mechanical Sensors) array that includes an accelerometer, eCompass and gyroscope, and there’s also an ambient light sensor. Motion has always been big on audio, and so the R12 includes a multi-directional array microphone system as well as two speakers.

For wireless, there’s an Intel Dual Band Wireless-AC 7260 WiFi module that also includes Bluetooth 4.0. Optionally available is either 4G LTE mobile broadband with GNSS (a combo that can use our GPS and the Russian GLONASS GPS) or a dedicated GPS module based on u-blox 7 technology. And there are two cameras, with 2.0 megapixel resolution in the front and 8.0 megapixel in the rear.

The R12 being a commercial tool for professionals in various fields, Motion offers numerous extras and accessories that extend the tablet’s features and abilities. An example is the optional “SlateMate” bolt-on module can include up to three separate I/O devices, including scanners, RFID, and even a legacy serial port, should it be required.

As for performance commensurate with the big screen and the expected professional grade use, that’s provided by an Intel “Haswell” 4th generation i5 or i7 Core processor, indicating that the R12 is a higher end product. But more on that later.

Taking a closer look at the Motion R12

Unlike some of the newcomers to the tablet market, Motion has well over a decade’s worth of experience in tablets. The company burst onto the scene back in 2001/2002 when Microsoft launched its Tablet PC initiative. By concentrating on tablets and tablets only, Motion managed to succeed where many other early tablet makers failed. And by concentrating on business and enterprise, Motion learned to meet the needs of those customers with specialized accessories, extensions, and solutions. So the experience to make, and support, something that really works for professionals is definitely there.

In terms of design, Motion has always subscribed to a form-follows-function philosophy with understated elegance rather than simply following the latest fashion trends. That was evident in the company’s early adoption of Intel’s eminently practical MCA (Mobile Clinical Assistant) reference design with its handle and integrated peripherals, a platform that serves Motion and its customers well to this day in the company’s C5 and F5 product lines. Motion has also been an early adopter of all sorts of technologies that make a field professional’s life easier. Examples are superior displays, high quality sound capture, dual mode input, and capacitive multi-touch when almost no one else had it.

So it’s no surprise that, once again, Motion created a tablet that’s different both visibly and under the hood. Below is a look at the R12 tablet from the front and from all four sides. Note how the R12 is slender for a ruggedized tablet, and also how all I/O is neatly integrated into the design.